TORONTO -- George Floyd’s killing at the hands of police in Minneapolis and the ensuing wave of global protests have prompted many Canadians to take a deeper look at systemic racism, and national data reveals the stark racial divide in this country. 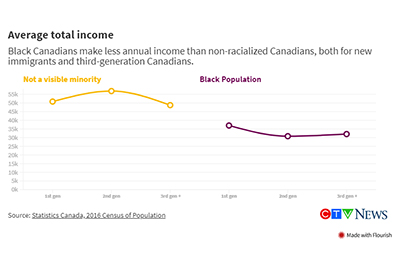 The most recent census data from 2016 shows that Black Canadians face far steeper economic challenges than white Canadians and other racial groups. For example, Black Canadians make significantly less money than non-racialized Canadians regardless of how long their families have lived in Canada.

That wage gap doesn’t go away over time. Third-generation Black Canadians make an average income of $32,000, compared with $48,000 for Canadians who aren’t a visible minority — a demographic that, due to the way census data is collected, includes Indigenous Canadians, who also experience income disparity.

Those numbers are troubling but not surprising, says Andrea A. Davis, chair of York University’s department of humanities and co-ordinator of the university’s Black Canadian Studies Certificate.